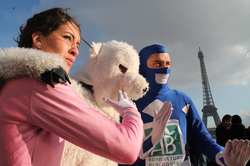 1) First steps: the birth of the "simul-action" concept


The MyCity+20 movement aimed at empowering young people with the concept of "simul-action", which consisted in simulations of the Rio+20 Summit in ten different cities, paired with a debriefing phase and on-going mobilization. The core idea was to prove that youth was ready to play an active part in international negotiations and to shape its own vision for a sustainable world.


The first CliMates International Summit was held in Paris from October 29th to November 2nd 2012 at Sciences Po University. It gathered CliMates students from all over the world who reviewed and debated one year of collaborative research. During one week, students acted as negotiators and focused in small working groups on specific topics within the general framework of climate negotiations. High level experts, from prestigious research institutions, public and private organizations, also participated in this Summit, which became the starting point of the adventure of CliMates in the field of international negotiations on climate change.


CliMates and the REFEDD (French Student Network for Sustainable Development), taking inspiration from the Qatar in Brussels initiative (by Young Friends of the Earth Europe), organized a week of awareness-raising around the COP18 in Qatar in December 2012. This event aimed at "inviting COP18" in Paris in order for students to discover the complexity of negotiation processes. The project also focused on bridging the gap between Paris-based participants and the delegation at COP18 in Doha via Skype calls. Moreover, various activities were organized such as a Flashmob, open workshops with citizens in public places and conferences with civil society representatives. Check out the Doha in Paris website here.

The Doha in Paris team decided to expand their initiative and created the Warsaw in Paris project, a 6-month mobilization and training initiative around the COP19. Technically, Warsaw in Paris is like Doha in Paris plus a large education phase prior to the COP. Our team organizes workshops about negotiation processes, simulations of the COP in one high school and three universities in the Ile-de-France region, as well as the traveling of a French youth delegation to Warsaw in order to attend the COP19 in November.
Learn more about it in our Community section.

3) Let's get crazy and international: COP in MyCity!

Following the Warsaw in Paris initiative, COP in MyCity was launched in August 2013 and pushes for young climate leaders and youth organizations across the world to "invite" climate negotiations in their cities by running a simulation of climate negotiations and by mobilizing the young people through concrete projects focused on the issue of climate change. Discover what makes the specificity of the COP in MyCity method here!