Especially observed in the last 60 years, climate change is a phenomenon of increase in the average temperature of oceans and atmosphere worldwide. Since its creation, Earth has always known cyclical changes in climate, ice ages alternating with warmer periods. We know that these cycles last about 100,000 years. There is a difference of 5°C on average between an ice age and an interglacial period. The worst scenario of the IPCC predicts a rise of temperature between 4 and 6°C… in only a century. The current issue is about the intensity of GhG emission growth: the rate of change is unprecedented. 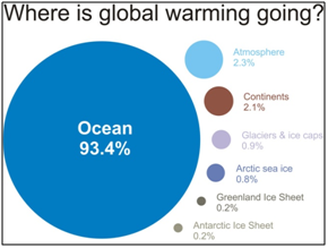 How can we identify global warming?

The first sign of global warming is the overall increase of the temperature (of the atmosphere and oceans).
This variation also leads many others like:
Since these phenomena have never been observed before, the scientists examined human activity in order to find the causes of this new phenomenon. 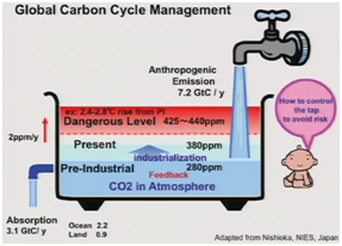 What are the causes?

The rise in global temperatures recorded since the mid-twentieth century is extremely likely the result of the accumulation of greenhouse gases of human origin. Greenhouse effect (that traps solar radiation and warms the Earth surface) is not a problem itself: if it didn’t exist, the average temperature on Earth would be minus 17°C ! There would be no human life! The main problem is indeed the new growth of GHG emissions which is so big that the atmosphere doesn’t have the time to release the extra CO2 in other carbon sinks, being the ocean and the biosphere. The greenhouse effect is multiplied.

CO2 is the most well-known greenhouse gas, but there is also methane and nitrous oxide. CFCs, used in appliances producing cold (refrigerators, air conditioners, etc) are also problematic. The matter is that CO2 is a greenhouse gas with long life, almost 100 years according to IPCC scientists. Even if we decrease emissions of CO2 today, the concentration in the atmosphere will not decrease immediately. CO2 is produced by burning fossil fuels (coal, oil and natural gas) and producing cement. The increase of CO2 in the atmosphere is also amplified by deforestation as usually plants consume CO2 and then release oxygen. Agriculture, especially the raising of cattle is also a great source of CO2 production because methane degrades into carbon dioxide.

According to the different climate models, the effects of global warming will be very diverse and geographically unequal. These climate changes could have catastrophic impacts on the environment and human life as they will continue for hundreds of years after the stabilization of atmospheric concentrations.

If science has evolved, climatology remains a highly complex area. According to IPCC, it is extremely likely (about 95%) that human activity is responsible for global warming since the mid-20th century but it is extremely difficult to define with precision the responsibilities. Due to their early industrial development, initially only North America and Europe were responsible for the majority of the emissions. Now, emerging countries are new CO2 emitters, and even if some green technologies tend to decrease pollution, emissions keep growing.

In such a context, the international community founded the scientific body IPCC (Intergovernmental Panel on Climate Change) in order to provide the world with a clearer scientific view on the current state of knowledge in climate change and its potential environmental and socio-economic impacts. The IPCC has published fifth reports (1990, 1995, 2001, 2007 and 2013) which often raise awareness and prepare the political ground for climate agreements. In the “Summary for Policymakers” published in September 2013, climate experts harden their diagnosis. According to 4 scenarios by 2100, the average temperature of the Earth is expected to climb from 0.3 to 4.8 ° C and the increase in sea level should be 26 to 82 cm. Most of the features of climate change will persist for centuries even if CO2 emissions are stopped. This inertia of climate change announces an unprecedented challenge for humanity.
Read more on international negotiations here